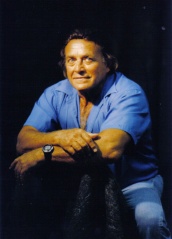 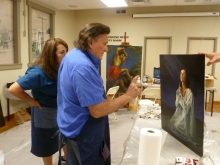 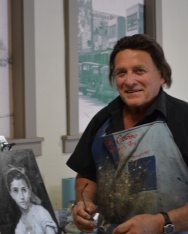 It is with ineffable sadness in our hearts, that I must report this news.  Our friend and long-time art teacher and mentor, Maestro Frank Covino, passed away suddenly on Tuesday, February 16, 2016, after being pronounced “cleared of cancer” just last week.

If I may use a bold simile, his loss feels like looking up at the mountains in Sugarbush, where Frank worked hard to build the home he loved, and seeing that the grandest of summits has disappeared from our sight.

Here is a note from his wife, Barbara Covino, that you will all want to read:

Subject: It is with a deep abiding sorrow in my heart that I write this letter…forgive the delay but it has taken time to believe this is true…

Beloved friends and family , one and all,

After two days of profoundest shock, and countless tears I realize I must write you.  It is with a heavy, heavy heart that i must inform you that dear Frank has passed away unexpectedly on Tuesday night, February 16th.  It was quick and he did not suffer–a death we would all prefer–but he had been progressing so well, it was a gut-wrenching shock that still is unbelievable.

I truly cannot imagine a world, or a life without him…32 years of happiness and adventure.  Life was never boring with him!!! What an amazing talent, a brilliant man with a wealth of knowledge, a gentle and sensitive man who had to excel in everything he did, and was thus an inspiration to all who knew him.  He encouraged others to strive for excellence and to believe in themselves, giving them the tools to create a positive reality in their lives, whether it be art or health.  We all can repeat that golden maxim: IT’S NEVER TOO LATE TO AMELIORATE! Wise encouraging words, those.

But he was more than the sum of his parts; he was a genuine force of nature, a real Renaissance man, but above all else, he had a kind heart and a very great soul. We all loved him so; there will never be another Frank.  But I know it is now time for each and every one of us who was touched by his life, to take that spark and pass it on.  He gave us wings and it is time for us to fly…Make him proud!!!

I am too choked up to continue writing.  God Bless each and every one of you who had a place in his heart…family, friends, students….He loved you all sincerely and without guile….

We are in the process of collaborating with the family and planning both a smaller family funeral as well as a larger set of celebrations of his life and legacy open to all who loved him–one in Vermont and one on Long island.  As soon as the Covino south clan and Mark and Jennifer and I hammer out the details, I will email you all, soon as can be done.

We are going to give that wonderful man a send off he won’t soon forget!!!

PS: PLEASE FORWARD THIS to everyone you can think of. It has grown into a cast of hundreds, and forgive the delay but it has taken time to believe this is true.

On our trip to the de Young and Getty museums last week, we took photos of paintings wherever possible. Of course I know it’s difficult for photography to capture the true essence of paintings and their myriad nuances of colors and values, but now I really know it. There aren’t many paintings like Girl with a Pearl Earring with which I have such intimacy, so arriving at a more complete understanding of this was a kind of epiphany for me.

During the painting’s latest restoration (1994), they discovered that Vermeer’s original background had a dark green enamel-like surface, accomplished through the application of glazes. However, the pigments available to him faded so much over 350 years, that the background looked blackish. This was corrected by the restorers and now, you can almost see the brushstrokes of the slightly sketchy transparent earthy-green glaze applied over the dark background underpainting.

Here is a photo of a high-quality postcard I bought, since the de Young did not allow photos of the special exhibit on loan from the Mauritshuis, particularly of the “Dutch Mona Lisa,” as she is called. They had her under guard at all times. Although a photo doesn’t pick up on the background color that well, can you see the slightest hint of  green? 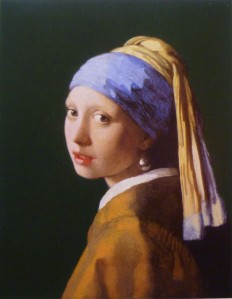 And here is a photo of the installation of Vermeer’s Woman in Blue Reading a Letter. Look at how the line curves where the floor and wall meet–this is an excellent example of barrel lens distortion: 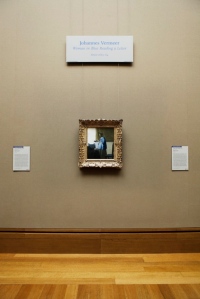 And on the subject of picture taking, what photography can and cannot do has been discussed and written about ad infinitum, so I won’t go into it much here other than to say that if you are painting from photographs, a solid understanding of the way the camera plays tricks on you is essential. Certainly it matters the quality of camera and lens you use. However, beyond that, you must be aware of how all cameras visually distort images, and then make adjustments in the painting you create from these photos.

For example, make sure to adjust your composition to account for the camera’s barrel distortion (convex lines), pincushion distortion (concave lines),  flattening; and adjust for the fact that reds will “read” much darker in value than they really were when you took the photo. You can make these changes right on you drawing, or they can be adjusted in Photoshop first. We all love what cameras do for us, but be aware that edges will appear sharper and you will have to soften them in your painting to create recession in your work. As Frank Covino always teaches, “Don’t gray the shadows; gray the shadow’s edges.” You must soften edges where you want to round your images and make them appear recessional.

You can always tell when someone paints from photos and is unaware of flattening, for instance. The subject’s hands or feet will appear larger than they are in real life, and out of proportion with the rest of the figure, because hands or feet are typically in front of the figure. You must know this and make them proportionately smaller in your drawing to compensate and adjust sizes to their correct proportions. In other words, don’t make the hands as big as the head, even though they may appear that way in the photo.

You can find out more about the subject of camera distortion at this excellent site: http://www.kenrockwell.com/index.htm

Also, James Gurney at http://www.gurneyjourney.blogspot.com (the famous creator of Dinotopia) has provided an ongoing and wonderfully thorough exploration into how we humans see.

Something that struck me about these exhibits were that, no matter how much impasto the artist used, they began with the smoothest of canvases or boards. I looked up at various angles and marveled at how perfectly prepared they were. I can never seem to get mine that smooth but I continue to search for the trick to it.

Another thing that surprised me was Girl with a Pearl Earring‘s eye color; they are not light golden brown, or blue, or green, or gray. They are gray-blue with the absolute slightest hint of light golden brown, so difficult to describe. I stood there trying to figure out how he accomplished that and if I were trying to duplicate that color without causing the eyes to become greenish, I would paint them gray-blue first, let them dry completely, and then ever so gently, glaze just a small part of the reflected light area of the iris with a golden brown glaze. I still can’t imagine how Vermeer really did it, but that would be how I would approach it.

Below are some other photos (including 2 closeups) I took that you might enjoy:

“A shaft of light from an unseen window poetically illuminates the textures and surfaces of a few objects on a stone ledge. This type of still life, known as a “monochrome banquet piece” for its harmonious though limited palette of browns and grays, was an artful invention intended to astonish the viewer with its beauty rather than a portrayal of an actual meal. Imported items such as a peeled lemon and the overturned Venetian-style glass contrast with local oysters and the monumental Dutch drinking glass with a textured stem. Claesz’s nuanced rendering reveals his interest in optical effects, such as the reflected windowpanes and the fall of light across the luminous lemon rind.”  de Young Museum 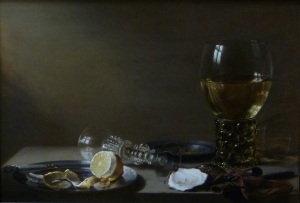 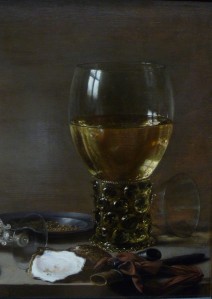 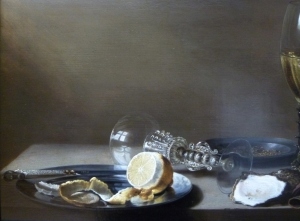 “Here the blacksmith god Vulcan pulls back the fine metal net in which he has trapped his wife, Venus, and her lover, Mars, exposing them to the laughter of their fellow gods. Like other Mannerist painters, Wtewael delighted in complexity and paradox. In this work he presents heroic figures on a tiny scale and Olympian gods in a compromising situation.” 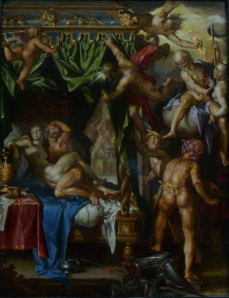 I had to take this photo through a glass case. I have been experimenting with painting on copper as many of the Old Masters did so, and saw the paintings on copper exhibit at the Phoenix Art Museum many years ago. They are exquisite to this day, with no craquelure. Experts attribute this to the fact that copper expands and contracts at approximately the same rate and temperature as does traditional oil paint.

Note: All text in quotes is taken from the Getty or de Young museum placards posted beside paintings.

and I am the farthest thing from a miniaturist.  This is the first post of my new blog and here I am talking more about radio than painting.  My husband is an NPR radio engineer and Ham Radio operator, and he just gave me a teeny, thin quartz crystal from a damaged oscillator unit.  He said, “Can you use this for anything with your artwork?”
I looked at the 3/4″ x 3/4″ piece of lovely translucence and imagined a very small portrait with an led edge-lit display and an ornate magnifying glass on a goosneck.  It could be attached to the side of a larger matted frame (6″ x 6″?) for viewing the painting (Otherwise, you wouldn’t be able to see it very well with the naked eye!).
Normally, I do life-size classical realism so this art tributary would be a diametric departure for me.  Do I have brushes tiny enough?  I would need a magnifier of my own just to create something this small. Strange how the painting muse strikes.  What do you think?

Anyway, this new blog of mine will be an amalgam of art techniques, step-by-step processes, conversation we share together, books, and art “flotsam and jetsam,” that colloquial reference to miscellanea.  I welcome your conversation and hope you will share your wisdom and discoveries.