We recognize whether an art object has good proportion or not by whether it is pleasing to our eye (or not), although we may not always be able to say why.  This phenomenon is related to the Golden Mean, a proportion that goes all the way back to antiquity. It is an aspect of beauty that we can easily adopt in our designs and be assured of success. 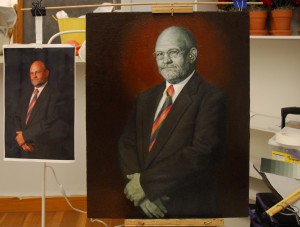 You will find that most Renaissance portraits are done in ¾ view with the model looking back at the spectator because, if you run a central divisional line right down the face, there will be one part of the face to one side of the division, and 1.6 parts to the other side of the division—the Golden Mean.

This Golden Ratio was used extensively by Leonardo da Vinci.  Look at his Last Supper and notice how the primary dimensions of the center, the room and the table were based on it.  You can also see it in Leonardo’s Mona Lisa; here are some Golden Mean divisions, superimposed: 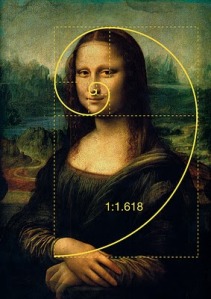 In addition to the Renaissance Old Masters, many other famous painters from Dali and Seurat, to Bouguereau and Burne-Jones have made extensive use of the ratio as well.

THE GOLDEN MEAN WILL NEVER FAIL YOU.

As a painter, you must create unity in your composition to make its message and visual impact cohesive.  Unity is the constant characteristic of all great art, and designing with the repetition of ratios helps to create and maintain that cohesion. Unity is an essential attribute of superior art, whether a portrait, landscape, or still life, and the repetition of ANY ratio will add unity (but the Golden Mean is best).

Let us say you wanted to do a landscape with 20% ground and 80% clouds (2:10 ratio).  You would make the composition more visually pleasing by including a stand of trees placed at the proper ratio.  Divide your surface horizontally into 10 parts and, at 2 parts of 10, place the trees; that ratio of 2:10 echoes the ratio of ground to sky.  And the more often you echo that ratio, even to the construction of rocks and trees, the more unity your painting will have and the more visually pleasing it will be.

5 is to 13 as 1 is to 1.618.  In other words, since the Golden Mean is actually a hair less than 1/3, one of the easiest ways to implement the ratio in your paintings is to apply the Rule of Thirds on your design to guide you in your placement of important focal areas.  Divide your drawing surface by placing a “tic-tac-toe” of nine equal blocks on it. The four points where the lines intersect indicate the best points for high interest locations.  The human eye likes these areas and gravitates toward them. Avoid centering your subject. In addition, don’t place your horizon line across the center of your composition—use one of the horizontal grid lines instead. You can break any of those nine areas down further by dividing into thirds again, then again, depending upon your design objectives.

One comment on “ON THE IMPORTANCE OF THE GOLDEN MEAN”

Unbiased, evidence-based discussion of the effects of diet, drugs, and procedures on heart disease

Articles, interviews and reviews to do with antique and modern picture frames