well, almost.  I just found out about it so we have decided to visit the Getty Center as well, on our way to the deYoung in San Francisco.  Here are some of the details:

Vermeer’s Woman in Blue Reading a Letter (ca. 1663-64), on loan from Amsterdam’s Rijksmuseum, is being exhibited at the Getty Center in Los Angeles, daily through March 31, 2013.  It will then go back to its home for the grand reopening of the Rijksmuseum on April 13, 2013, after extensive renovation.

From the Getty Museum site:

“Woman in Blue Reading a Letter represents one of Vermeer’s most enigmatic depictions of a new theme in Dutch genre painting (subjects from everyday life): well-to-do women in domestic settings, often so preoccupied that they are oblivious to the viewer’s gaze. This special installation highlights the variety of artistic contributions to the popular theme of the intimate interior in the 1660s to complement Vermeer’s quiet, harmonious reader. Gerard ter Borch’s Music Lesson, Jan Steen’s Drawing Lesson, Pieter de Hooch’s Woman Preparing Bread and Butter for a Boy, and Frans van Mieris’s The Doctor’s Visit from the Getty Museum’s collection, as well as Gabriel Metsu’s An Elegant Lady Writing at Her Desk with a Dog beside Her (on loan from a private collection in New York) share refined brushwork and dazzling illusionism in the rendering of highly-constructed private spaces.”

In addition, they are exhibiting a pair of large Franz Hals‘ paintings which will also go back to Amsterdam on March 31st. 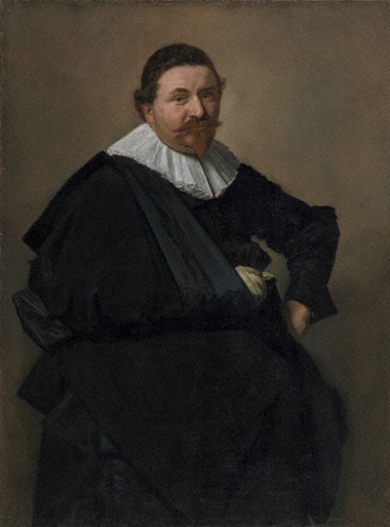 Here is more info from the Getty:

“About the Sitters–Lucas de Clercq (about 1603–1652) was a wealthy Haarlem merchant who dealt in potash (an alkaline material used in bleaching), bleached linens, and linen yarn.  Lucas married Feyna van Steenkiste (1603/4–1640), whose family was also involved in Haarlem’s linen and bleaching enterprises, in 1626.  Lucas de Clercq and his wife were prominent members of the extensive Mennonite community in Haarlem, most of whom were involved in the city’s textile industries. Proponents of non-resistance, Mennonites strove to follow the example of the apostles and to live a modest life. Both Lucas and Feyna are dressed modestly in sober black garments that do not ostentatiously display their wealth and social standing.”

Apparently, these paintings have never been in the Western United States until now, and who knows when they will return.

Unbiased, evidence-based discussion of the effects of diet, drugs, and procedures on heart disease

Articles, interviews and reviews to do with antique and modern picture frames