Here are more museum postings, which I will continue to do in order to give you the flavor of all we saw. Please keep in mind that there were many unavoidable light reflections, not only from the skylights and track lighting, but also from the surprising fact that many of the works were covered with glass; and no matter how good the museum quality of that glass, there were still added light aberrations in a few of the photos.

“This fantasy portrait belongs to the type known as a tronie, or a character study of a head. These pictures were created for sale on the open art market in Holland. Rembrandt frequently dressed the models for such portraits in fanciful costumes, as in the case of this man in military garb. The attire probably symbolizes Dutch fortitude and patriotism during the struggle for independence from Spain.”

From the Getty:  “In the Metamorphoses , the ancient Roman poet Ovid told a story about the god Jupiter, who disguised himself as a white bull in order to seduce the princess Europa away from her companions and carry her across the sea to the distant land that would bear her name.

During his long career Rembrandt rarely painted mythological subjects. Here he conveys a narrative story through dramatic gesture and visual effects. Bewildered, Europa grasps the bull’s horn, digs her fingers into his neck, and turns back to look at her companions on the water’s edge. One young woman falls to the ground and raises her arms in alarm, dropping the flower garland intended for the bull’s neck into her lap, while her friend clasps her hands in consternation and watches helplessly. The carriage driver above rises to his feet and stares at the departing princess in horror. In the background, a city shrouded in mist extends along the horizon, perhaps serving as an allusion to the ancient city of Tyre as well as to contemporary Amsterdam.The dark thicket of trees to the right contrasts with the pink and blue regions of the sea and sky. Sunlight breaks through the clouds and reflects off the water, but the sky behind the trees is dark and foreboding.

A master of visual effects, Rembrandt took pleasure in describing the varied textures of sumptuous costumes and glittering gold highlights on the carriage and dresses.”

“Rembrandt painted and drew numerous elderly male subjects in contemplation throughout his career. Here, strong light illuminates the man’s chest and face, which is energetically modeled with fine, textured brushstrokes. In contrast, the heavy folds of his gown and soft material of his hat are more loosely executed. Rembrandt was sensitive to Jewish tradition, and sought to capture its character through the representation of physical appearance and an internal spiritual state.” 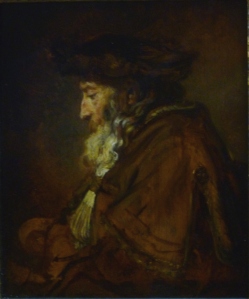 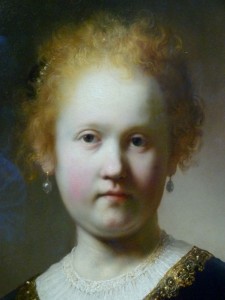 And from the Getty http://www.getty.edu/art/installation_highlights/rembrandt.html:

Rembrandt Harmensz. van Rijn‘s Portrait of a Girl Wearing a Gold-Trimmed Cloak is on temporary view at the J. Paul Getty Museum at the Getty Center. The work, which has not been on public view since the 1970s, is on loan from a private collection in New York.

The sitter, an unknown woman, is richly dressed in the fanciful costume Rembrandt favored for biblical and mythological paintings. He scratched in the thick, wet paint to create the pleats of the subject’s white shirt, and rendered gold embroidery on her black gown with almost an abstract series of daubs. Light from the painting’s upper left creates atmosphere behind the sitter and strongly illuminates one side of her rounded face, along with the strand of pearls in her hair and one of her large pearl earrings.

Portrait of a Girl Wearing a Gold-Trimmed Cloak inspired the facial types of many of Rembrandt’s heroines in the early 1630s.

We’re off on a three-day job, so more photos in a few days….

Note: All text in quotes is taken from the Getty or de Young museum placards posted beside paintings.